In 2015, Florida started using a new written driver’s exam. The new test is longer, up from 40 questions to 50, and test items come from a bank of 1,000 questions rather than being the same on every test, making it much more difficult to cheat. Unfortunately, the test was so much more difficult, only 41 percent of those who took the test in the first six months were able to pass it, and in some counties, as few as 20 percent were achieving a passing score in early 2015.

In an effort to remedy this problem and bring the number of test-takers who pass the test up to the state’s target of 70 percent, Florida has updated the state driver’s manual. It is still 104 pages long, but the number of charts and graphics has increased. To try to appeal to younger readers, emojis and more color have been added. The manual also includes more bold and italic type to help highlight key words and phrases.

Although the number of passing scores had risen to 58 percent by December, 2015, thanks to word spreading that it is very important to study, state official felt the new manual would get them closer to their target number by making the manual less dry and boring, thus encouraging residents to read it. The have also eliminated some misleading and poorly worded questions on the new test. Officials attempted to make the manual easier to understand and less intimidating that the previous edition. The new book is available in most driver’s license and tax collector’s offices, and may also be viewed online. You can also review what you are required to bring along when you take the test, as well as other important information. 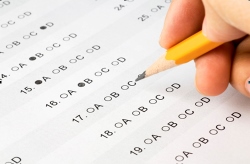